Clash of the Titans – The North Remembers 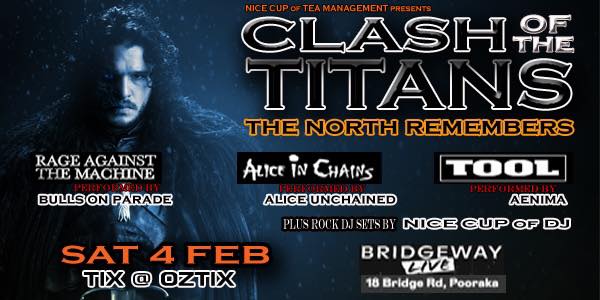 Northerners of Adelaide, it’s your turn gear up for the biggest rock extravaganza hitting The Bridgeway on Saturday 4 February 2023, Clash of the Titans – The North Remembers.

Summer is coming……..so get set for the music from three of the biggest ROCK acts ever…..Rage Against The Machine, Alice In Chains and TOOL….to shake Adelaide’s premier live venue, The Bridgeway to its foundations this coming summer on Saturday 4 February 2023.

Three of the best tribute acts in the land, Bulls on Parade (performing RATM), Alice UnChained (performing AIC), and Aenima (performing TOOL), come together for one EPIC night of ROCK. Featuring spectacular full concert audio and visual production, this is a show any self-respecting Adelaide Rock Fan simply can’t miss.

Hot on the heels of packed out shows in 2022, Clash of the Titans makes its debut at the best live venue in the north, The Bridgeway. So grab your tickets from OZTIX before they sell out.