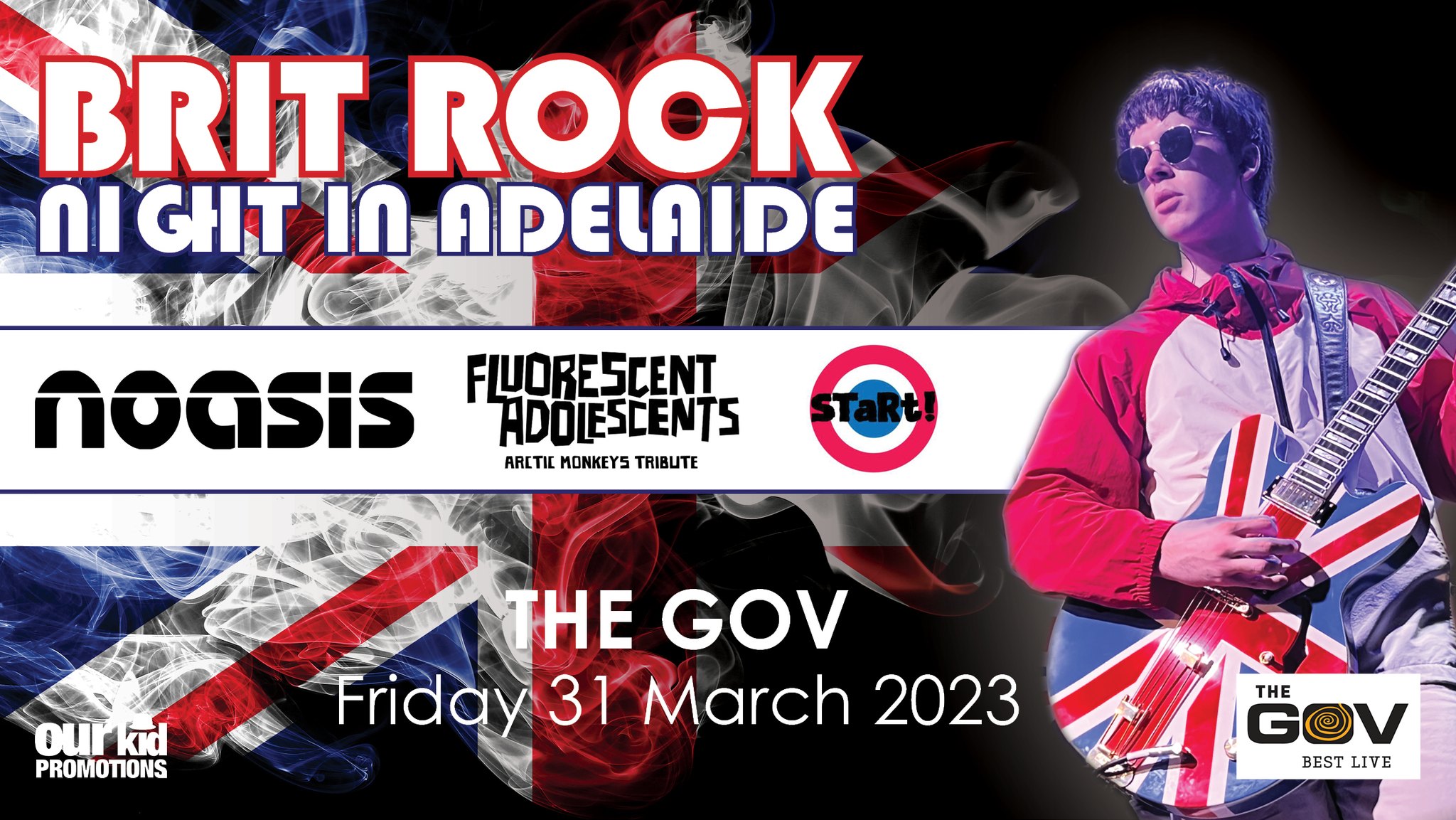 NOASIS are back at the Gov for their first STANDING SHOW in Adelaide for over two years!! Having toured Australia and the UK they’re in Adelaide for a massive BRIT-ROCK event!

Three of the hardest working and most authentic sounding tribute bands on the Gov Main Stage!

Call up your friends… do not miss this once in a lifetime line up.

STaRt bring you: The music of The Jam & Paul Weller.

The Jam & Paul Weller has and continues to influence musicians today. The ModFather Weller epitomizes cool with style, a London look, and sound that carries on and on through the generations.

His music has been in our houses since 1977 with the album IN THE CITY.. in a punk rock/new wave/mod revival vibe that revved the motors of many angry teenagers and scooter owners, who dusted down their machines and hit the streets. Hits across Down in the Tube station at midnight – Town called Mallice – That’s Entertainment – Going Underground – The Eton Rifles to name a few.

Later with the Style Council he hit a Soul vibe with their album Blue-eyed Soul in 1983 and later Cafe Bleu… producing massive hits My Ever Changing Moods – Shout To The Top – You’re The Best Thing – Walls Come Tumbling Down..
Paul Weller went solo in in 1992 and released Eponymous and in 1993 Wild Wood. Producing two huge hits Wild Wood – Sunflower.

Formed in Sheffield UK in 2002. Alex Turner and the band are known to be one of the first bands to use the internet and social media to build their fanbase, plugging them into the next generation.

Their debut album “Whatever People Say I am, That’s What I Am Not” 2006 became the fastest selling album in UK Chart history and has been hailed as one of the greatest debut albums winning the Best British Album in 2007 Brit Awards. Winning again in 2008 with Favourite Worst Nightmare album.

International fame came with their fifth album AM in 2013 which housed the global hit “Do I Wanna Know” topping four Billboard charts in the USA and certified platinum over there. In all to date the Arctics have won SEVEN Brit Awards, Mercury Prize winners, Ivor Novello Award, NME Award and nominated for no less than SIX GRAMMY Awards!! Hits include: Do I Wanna Know – Why Do You Only Call Me When You’re Hi – I Bet You Look Good On The Dance Floor – When The Sun Goes Down and loads more!

Arctic Monkeys continue to deliver with their latest album The Car released in late 2022 and immediately contending for album of the year, and touring to our shores to headline Falls Festival and Heaps Good in Adelaide to kick-off 2023.

NOASIS bring you: The Music of OASIS.

OASIS are known as the best British band of the 90s and the Gallagher brothers continue to work solo as the dust flies still following the band breaking up in 2009. But wind back to the days of 1993 when they hit the music scene like a freight train. Formed in 1991 originally known as Rain! Signed to Creation records in 1993 (Alan McGee) and released their debut album Definitely Maybe in 1994. Hits Supersonic – Slide Away – Rock n Roll Star – Live Forever – Cigarettes & Alcohol.

In 1995 they follow up with (What’s The Story) Morning Glory? Hits Roll With It – Wonderwall – Don’t Look Back In Anger – Some Might Say – Cast No Shadow – Morning Glory – She’s Electric – Champagne Supernova.

They produced seven albums before they split in 2009–at which point they had sold 70 million records worldwide. They are amongst the most successful acts out of the UK with 8 UK Number-One singles and 8 UK Number-One Albums. They also achieved 3 Platinum albums in the USA. They won 17 NME Awards, 9 Q Awards,
6 Brit Awards, and 2 Grammy Awards. They have won the Outstanding Contribution to Music awards. And an Award for One of the Best Albums of the Last 30 years for (What’s the Story) Morning Glory?

OASIS continue to have over 17 million monthly listeners on Spotify.